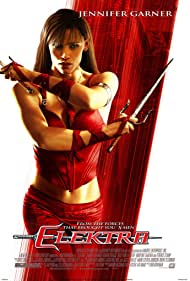 In the ultimate battle between good and evil stands a warrior who makes the choice that tips the balance. A strong, mysterious and a deadly sexy action heroine - a lethal synthesis of grace and power. Not long after recovering from seemingly mortal wounds, Elektra has severed all ties with the world, living only for her next assignment. But in an unexpected turn of events, she is forced to make a decision that can take her life in a new direction - or destroy her. Key players in Elektra's journey are Stick, a blind martial arts master responsible for Elektra's "resurrection," and Mark Miller and Abby Miller, a father and daughter on the run from The Hand, a powerful syndicate whose members practice the dark martial art of ninjitsu. Written by Anthony Pereyra {hypersonic91@yahoo.com}

Elektra is a lethal synthesis of grace and power with the mystical power known as Kimagure: a limited ability to see the future. She has purposefully severed all ties with the world and lives only for her next assignment. Elektra's latest job forces her to make a decision that can take her life in a whole new direction or destroy her. Written by Anonymous

Kirigi and The Order of the Hand send Elektra on a mission to kill the widower Mark Miller and his daughter Abby. Elektra becomes friendly with the two Millers and allies herself with him and defends them both from Kirigi's ninjas and other assassins. But is there more to the Millers than meets the eye? Written by Anonymous

Elektra, once a student of Kimagure, a force for good, who's masters can see the future and even bring people back from the dead, is now a paid assassin. The enemy, the force for evil, at this time is known as the hand, whose members use the dark arts. In this tale Elektra is given an assignment to kill a man and his daughter. However when the time comes to complete the mission she is unable to. The daughter is also being sought by the Hand, for she is known as a treasure that can tip the scales in favor of either good or evil. The Hand, who have the policy of "If we can't have her then no one can", send their own people to kill her. Elektra then allies herself with the Millers and helps to protect them from the Hand. The journey to the climax, the ultimate battle between good and evil for the treasure, has some interesting revelations, heading for a finale with an interesting twist. Written by Andrew Brooks